While I truly enjoyed the trip with Mei from Sagada, Mountain Province to El Nido, Palawan and finally in Zamboanga City, another companion of mine also enjoyed the trip, my Lego companion, Frank.

Everybody, meet Frank. From the world of Lego, Frank works as a software engineer. This is his first time he is traveling with me, so he asked for lots and lots of photos. So from here on, it will be Frank speaking to you guys.

Hey guys! Frank here. Allow me to share my first time to travel to these parts of the Philippines.

From Davao City all the way to Baguio City, I was asleep. We left Davao City pretty late, so I had some shut eye during the whole time we were traveling.

When I woke up, we were already at the Kennon Road View Point in Baguio City.

After a quick nap, next thing I know we were already at the highest point of the Pan-Philippine Highway in Atok, Benguet. That was some nap I had. Anyway, the views were just beautiful!

A few more hours of traveling, we find ourselves at the Amgaleyguey View Point, which was supposed to give us a view of the vegetable terraces but due to the fog, we can’t see the nice views.

We arrived in Sagada late in the afternoon and it was just getting colder by the hour. It was a good thing I brought my orange sweater with me.

The following day, we woke up early and made our way to Banaue to see the Batad Rice Terraces, which was a sight to behold.

On our last day in Sagada, we woke up at an even earlier time to witness the sunrise at Kiltepan Peak. Sadly, it was cloudy when we went there and we were not able to fully see the sun rise. Anyway, the views were still beautiful.

After Sagada, our next destination was El Nido, Palawan. During this trip, I met a new friend, Connor, who happens to work as a lawyer and a huge fan of DC Comics.

Sadly, we both forgot to bring our swim suits and instead of enjoying the pool at the Cadlao Resort on our first day here, we just enjoyed the views from the restaurant.

On our second day in Sagada, we had a tour at some beautiful islands and beaches. I was a bit nervous during the whole trip. I am not a fan of open waters. Who knows what creatures lurks under the sea. I bet they are way bigger than me. 😉

Anyway, Connor was a brave soul. He even had a photo near the bow of the boat!

We were also able to go down the boat and spend some time on the beach. For our first day of island hopping, we spent a few hours on Talisay Beach. Everything around us was just beautiful with the white sand beach, clear waters, and limestone formations.

For the second day of the island hopping in El Nido, we had lunch at Shimizu Island, which was also beautiful.

For the last leg of our tour with Mei, it was at Zamboanga City, dubbed as Asia’s Latin City. Connor still accompanied me during our tour here. This time, he ditched his The Flash shirt and donned some comfortable sleeves.

During our time here, we had a shot with the iconic Vintas at the R.T. Lim Boulevard.

Overall, we enjoyed the whole trip, from Luzon all the way to Mindanao. Thank you Mei!

Hey guys, RJ here again. I have to agree with Frank, the whole trip was really fun!

Personally, my favorite was the trip to Sagada and the rice terraces. I have always wanted to visit these places and with Mei and her family, I was able to finally come here. I will definitely be back here in the future.

The food we had throughout the trip were also really good. We had a lot of dishes that we liked.

Kape Diaries would like to thank Colors of Mei for giving me the opportunity to join her in her trip here in the Philippines.

To know more about her trip, visit her website, Colors of Mei (colorsofmei.com)

The International Coffee Day "is a celebration of the coffee sector’s diversity, quality, and passion. It is an opportunity for coffee lovers to share their love of the beverage.” (International Coffee Organization)
Happy International Coffee Day!
Thridy Third's Strawberry Chantilly Cake is a guilt-free cake you can indulge on.
#ObreroCoffeeTown is living up to its name as more coffee shops open in the area.
Latte
House of Sambal's filling Beef Rendang and Chicken Satay combo 🤤 (It is usually served with 2 sticks of satay but I have been a good boy, I bought an extra stick)
A rainy evening at @hidncoffeedvo
Owl Café's coffee jelly is a must try 🥰 I am usually not a fan of "sinkers" but I am loving their take on the classic iced coffee with milk. 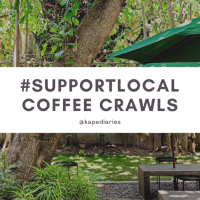